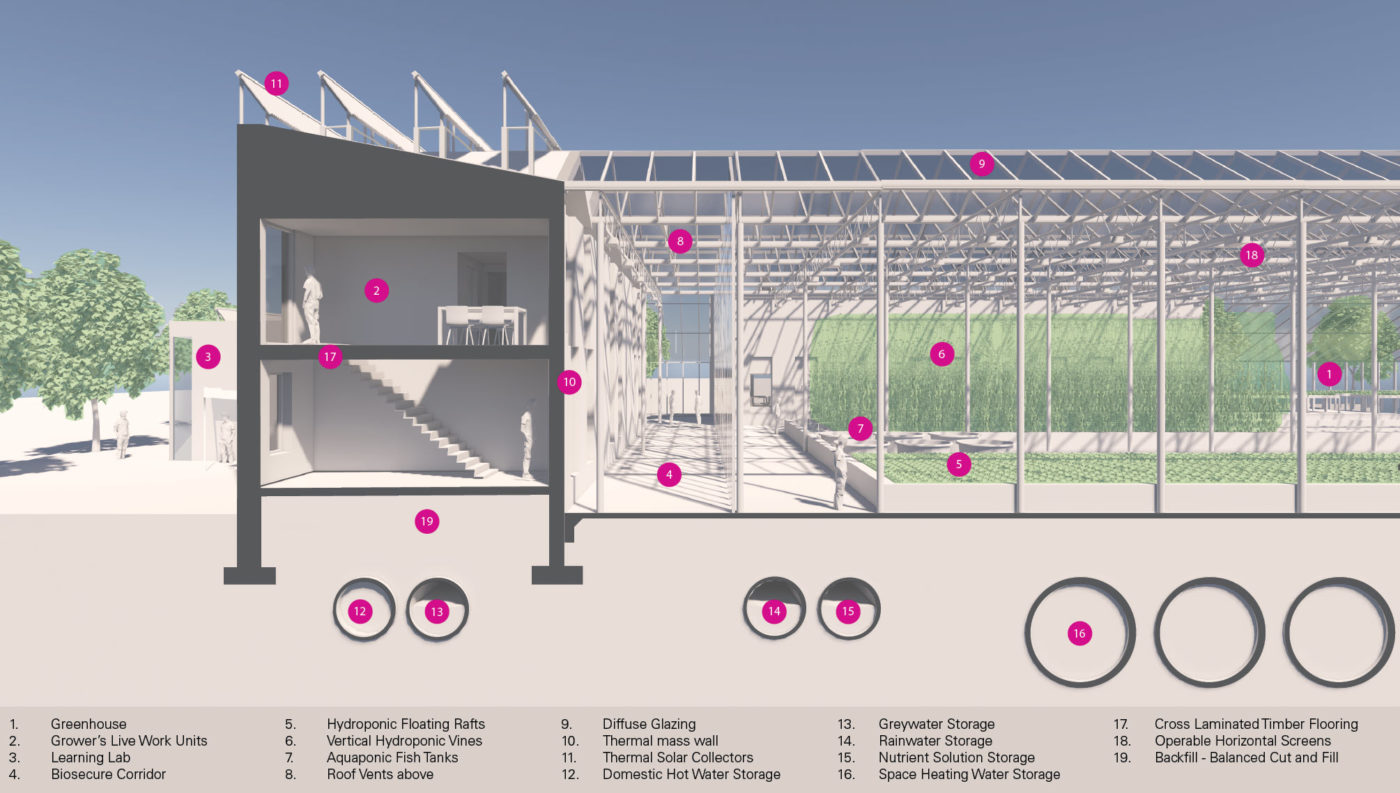 In 2019, we expanded a proposal drafted a year earlier to establish Chicago’s first Food District on the West Side, building on neighborhood assets like our Inspiration Kitchens project that won the 2013 Rudy Bruner Award Gold Medal. In the intervening years, projects like the Hatchery, a food business incubator, were built nearby in what was formerly the City’s largest food desert. On the other side of the West Side’s expressway, we will soon open a new home for Sweet Beginnings, a social enterprise sustained by honey harvested at six apiaries located throughout the City. Colocated with North Lawndale Employment Network‘s new headquarters, Sweet Beginnings will supply fresh honey to a new sister-establishment called the Worker Bee Cafe. In a full-circle gesture, the Cafe will serve pastries made by Inspiration Kitchens, mutually building both organizations’ capacity.

By early 2019, we knew there was just one missing puzzle piece to a Food Innovation District that prepares, processes, and grows food locally. With its supply of vacant land within three miles of the City’s top restaurant corridors and major produce distributors, Chicago’s West Side was the perfect place to start growing food hydroponically in Dutch-style greenhouses. As evinced by the COVID pandemic, Chicago’s existing food supply chain is long and fragile, with a massive carbon footprint. By dramatically shortening the supply chain, every dollar Chicagoans spend on food will circulate locally within a decarbonized economy.

The Food District on the West Side will do more than feed people in a footprint of less than a square mile. It will connect citizens, without regard for socioeconomic status, gender, age, or ethnicity, with a great unifier – food. The District will build resiliency through better food choices offered by a food system to improve outcomes for People, the Planet, and Profit.

Throughout history, Chicago has derived great wealth from food. It originally served as the shipping hub for the Midwest’s agricultural bounty. Later it was an outpost for immigrant cuisines and an inventor for confections and variations on ethnic foods. In this modern disruption, we envision growing food 100% pesticide-free, year-round, creating new entry-level jobs where workers earn a living wage, using 90% less water than field-grown vegetables. In less than a day, harvested food will travel to the market. We call the missing puzzle piece AgriFlats. An aerial depicting the larger AgriFlats development on the 21-acre site at Kostner and Roosevelt. Sixteen acres are under glass in the greenhouses.

AgriFlats recombines a business incubator with Dutch-style Controlled Environment Agriculture (CEA) to provide fourteen aspiring growers with a one-acre greenhouse and an attached live-work unit where they can launch new businesses while creating jobs in the community. Supported by a newly created Cooperative, AgriFlats includes support for the community, with spaces for meetings, learning, and housing to benefit the residents. Instead of the greenhouses only producing food, they will be economic generators, creating new year-round jobs.

When modeled in IMPLAN, AgriFlats will create 230 nonseasonal, permanent jobs in the community. Construction will create an additional 367 temporary jobs. Annually, AgriFlats will support 159 direct jobs, most of which can be filled by residents trained by not-for-profits like North Lawndale Employment Network.

For AgriFlats farmers, the greenhouses’ passive solar habitat will allow them to grow food in hydroponic and aquaponic CEA systems, under intelligent digital control, in the middle of winter. They will grow food faster than possible in the soil while consuming a tenth of the water. They will grow crops without pesticides year-round in less space, with less labor, without eroding soil.

Chicagoans will be able to enjoy fruits and vegetables ripened on the vine in their City, year-round, selected for taste instead of durability for transport. Locally grown food will have a longer shelf life and an even longer home life.

Local restaurants will have access to commodity and non-commodity produce that they can influence. Chicago can easily leap-frog New York City’s feedback system, where chefs order specific produce varieties to be grown during the following season. Chicago’s farmers can aspire to not only producing food but seeds for new varieties.

Instead of a permanent location for growers, AgriFlats aspires to be an incubator and accelerator. Like other industries, growers will need to scale their operations by a factor of 20 to 60 to compete in broader markets. Once growers achieve success at a modest scale within five to seven years, they can scale their operations elsewhere in the City or the exurbs to increase their profitability and reach.

As the Food District takes hold, the unifying influence of food will buttress resiliency. As food production increases, cooperatives of small, sophisticated urban farms will offer a broader range of food that tastes better. Food producers will share risk and resources. Citizens will diminish their reliance on large-scale monoculture and the long-range carbon-based transport that enables it.

In Illinois, which has lost over 99 percent of its soil-producing native prairies that naturally sequester carbon, citizens need to find a better balance between food systems and natural ecosystems. It is time to start cultivating what we want.

Along with Sweet Beginnings, the Worker Bee Cafe, Hatchery, Inspiration Kitchens, and local chefs, AgriFlats will promote a food culture that will build community, awareness, and economic vitality by starting with the project’s “Why?” Good food will be more valued than ever. Most important, AgriFlats will connect West Side residents with their local food system, offering them the City’s broadest and best food choices in a place once known as its largest food desert.

Continue to dig in on AgriFlats with this post. You can download our complete AgriFlats proposal here.