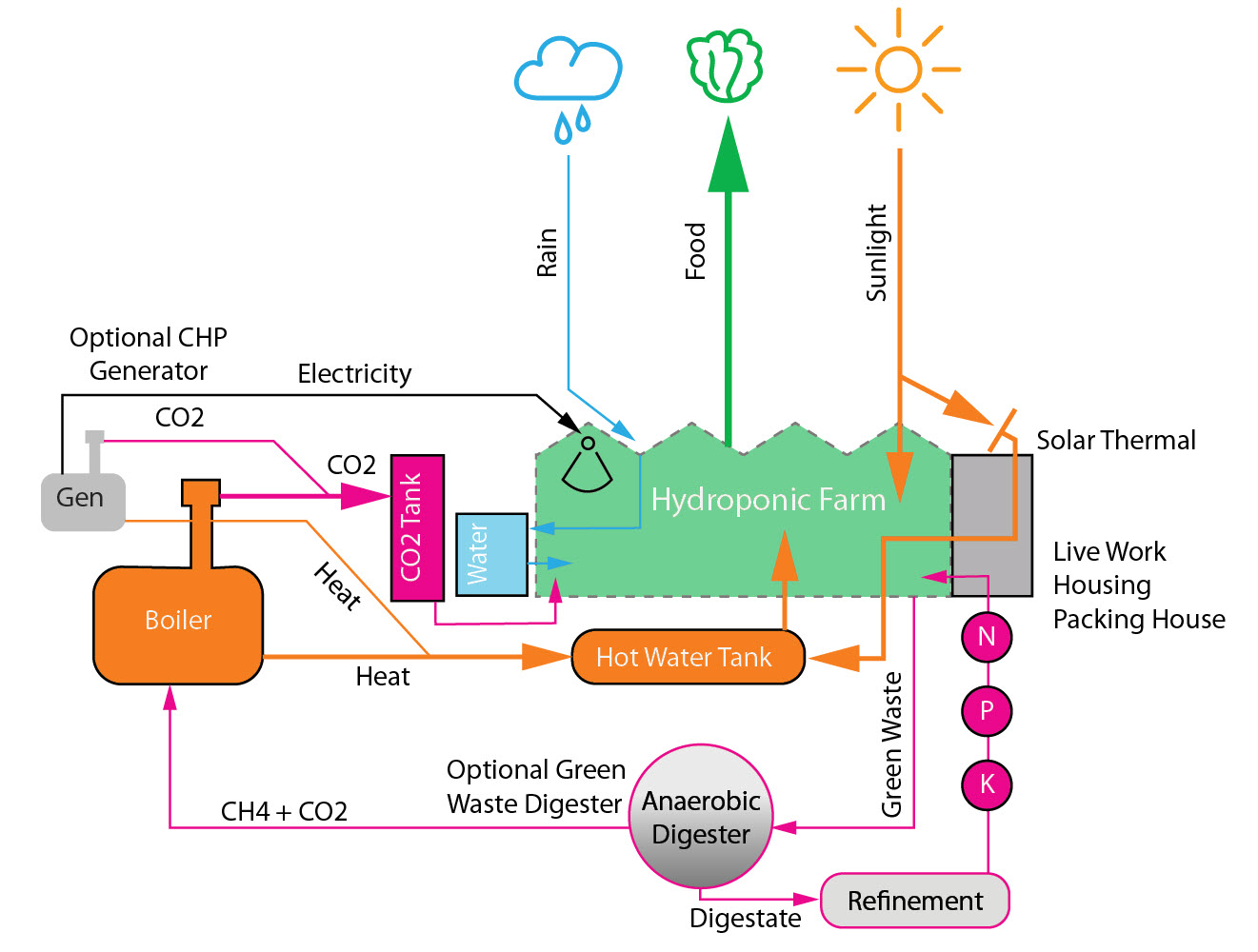 In a previous post, we introduced our proposal for Chicago’s West Side called AgriFlats, the final piece of a Food Innovation District aiming to revitalize neighborhoods by starting with “Why?” This post drills down on the details.

Merely reducing our carbon emissions is insufficient to stifle global warming. We have to return vast amounts of carbon to living ecosystems. AgriFlats will demonstrate how to do that, by using dense urban agriculture to liberate outsize tracts of land in rural areas currently being traditionally farmed.

The primary energy powering AgriFlats is renewable solar energy. The transparent skin of a greenhouse admits a broad range of solar energy that gets trapped inside, heating the interior during winter. During extreme cold, active energy harvested by solar thermal collectors mounted on the packing house, live-work, and residential rooftops will supplement the passive solar energy. These collectors will heat circulating water with the sun’s energy and pump it to underground storage tanks, insulated with vacuums like thermos bottles. Instead of relying on ancient solar energy banked in carbon fossil fuels to heat its greenhouses, AgriFlats will use energy stored from the previous season.

Since Chicago’s climate demands three times as much energy annually to warm its buildings and cool them, AgriFlats prioritizes low-grade thermal energy over high-grade photovoltaic energy. Solar thermal collectors will harvest much more of the sun’s energy, at up to 70 percent of the sun’s available energy, compared with only 20 percent for photovoltaic panels.

Summertime cooling will still be necessary. To provide passive cooling, roof vents in the Dutch Venlo greenhouses will open, allowing hot air to escape. Circulating water stored underground at a stable 55F temperature will cool the incoming air. Likewise, the nutrient solution, which resides below grade, will also contribute to cooling the greenhouse during the summer.

The residential units along Kildare will be heated and cooled with an active-slab radiant system that maximizes the space’s comfort with minimal energy use. Combined with the hyper-insulated, thermally massive structure, residents will have their energy needs met on site. Energy recovery ventilators (ERVs) will introduce fresh air into the apartments, recycling the greenhouse’s heat and moisture. A north-south section along Fifth Avenue

AgriFlats can generate electricity on-site with a Combined Heat and Power system (CHP) fueled by gas produced by an anaerobic biomass digester on-site or located in Auburn Gresham’s Urban Farm. These digesters can also produce natural gas for heating. See the illustration at the top of the post for a diagram of the closed-loop process. The biomass will come from the growing operation itself and the waste from restaurants and community members connected with AgriFlats. Growers can purchase any additional electrical energy required from off-site renewable sources.

In addition to powering pumps, the facility will use electricity to illuminate the greenhouses during winter and the residences year-round. The apartment interiors will be illuminated solely with LED sources to conserve energy. During winter, high-efficiency HID lamps, or spectrally selective LEDs will light the interior to extend the natural day to 14 hours. All waste heat emitted from these light fixtures will supplement greenhouse space heating. Greenhouse lighting will only be visible at night along Kostner.

If a shortfall of stored heat occurs during winter, an anaerobic digester’s gas will provide the energy. If additional heat is required, natural gas obtained from the grid will heat the space. Unlike most projects, though, equipment will capture the CO2 liberated by fossil fuel combustion for enriching the greenhouse, where rapidly growing plants will sequester it. In addition to 13 nutrients and water, plants solely build themselves with the atmospheric elements of carbon, hydrogen, and oxygen.

Our team designed AgriFlats to adapt to the escalating challenges of climate change. In 2019, Illinois farmers experienced the worst growing conditions in over 50 years. Most importantly, AgriFlats will use the vast majority of rain and snow on-site for its internal processes, rendering stormwater irrelevant. Since rain is superior to treated water for hydroponics, it will be harvested and stored underground until needed, even when it comes in fits and spurts. After snows, some of the thermal energy stored in underground tanks heat the greenhouse’s gutters, promptly clearing the roof so growers can harvest the sun’s energy when skies clear.

Since hydroponic and aquaponic growing uses a tenth of the water required for growing in soil, it is exponentially more resistant to drought. Engineers will size the underground process water reservoirs for 100-year drought conditions, securing the District’s food supply.

AgriFlats will also collect rain for non-potable (grey-water) uses in the live-work units and residences, such as toilet flushing and laundry. Contractors will isolate these systems, which will divert twice their volume from City sewers, to maintain health by preventing cross-contamination. They will install low-flow fixtures throughout the residences, further conserving domestic water use. During the cooling season, valves will divert the condensate from cooling systems for grey-water use.

As proven by the efficiency of greenhouses in the Westland region of the Netherlands, Dutch Venlo greenhouses are machines for growing. Their clear height accommodates vertical vine crops like tomatoes, cucumbers, eggplant, peppers, squash, and strawberries. Growers use hydroponic drip irrigation systems, fed from pipes running along the greenhouse floor, to grow these crops.

The Dutch Venlo greenhouse’s wide bays also provide a broad area for growing leafy greens, vegetables, and herbs horizontally. Farmers can grow plants on rafts floating on aerated shallow ponds (deep water culture) or in continuously irrigated channels in a nutrient film technique (NFT) setup. Aquaponic growers can use the Dutch Venlo, too, since they can situate fish farm tanks next to hydroponic crops. In AgriFlats, the fish tanks will remain above ground to maintain ideal water temperatures throughout the year.

Probably the best-known triple-bottom-line project similar, but much larger than, AgriFlats is AppHarvest in Moorehead, Kentucky. The B-Corp is seeking to become a publically-traded enterprise in early 2021.  Their 60-acre production greenhouse, three times the size as AgriFlats, will harvest its first crop in 2021 in an area formerly dependent on coal mining.  The CEA technology AppHarvest is deploying is nearly identical to what we proposed for AgriFlats. If successful, AppHarvest will be the third publicly-traded B-Corp on the NASDAQ, joining Esty.  Illinois currently has 30 privately owned B-Corps, including five in the food industry.