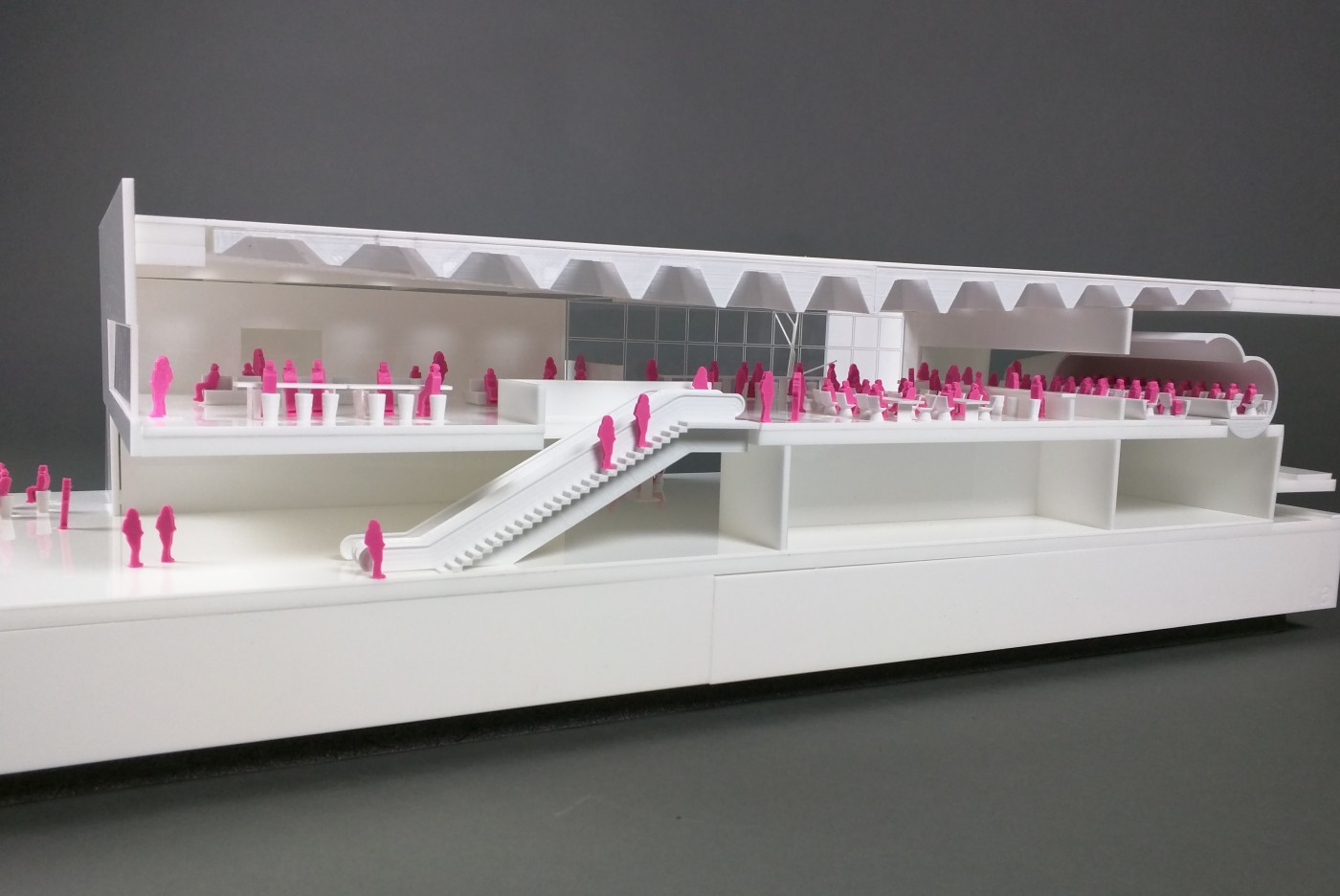 We participated in SpaceX’s Hyperloop Design Weekend, which was held at Texas A&M University on January 29-30, 2016. As a selected finalist, we developed a prototype design for a Hyperloop station. We shared the design with over 180 teams who traveled from over 20 countries.

Our hypothesis is that the ideal Hyperloop station should be integrated into the dense urban core of existing cities, obviating the second leg of travel required from outlying locations like airports. Consequently, the footprint of the station needs to be compact.

Our station footprint of 300 feet x 250 feet fits within the narrow dimension of most city blocks. To minimize the space required for the pod reorientation, we incorporated a three-point turn guideway located outside of the depressurized tube. After the pod exits the tube airlock, it travels along a guideway with relatively tight turns. At the second point of the three-point turn, the pod is unloaded. At the third point of the turn, it is loaded before entering the departure tube airlock.

The design focuses heavily on improving the User Experience. We hypothesize that the primary user of the Hyperloop will be the business traveler, who will benefit most from the instantaneous doubling of their market size, as two cities become joined at the hip. Instead of a hub and spoke transit model, the Hyperloop is best understood as a hub to hub connection, leveraging the existing spokes that already exist in urban centers.

As a small business owner, we would be willing to pay substantially to double our immediate market. This is what the Hyperloop offers.

During development, we studied station designs of traditional and historic modes of travel. We then recombined aspects of select stations to provide a superior User Experience for the Hyperloop traveler. Instead of grand vaulted train sheds that presage long journeys, we incorporated spaces closer in character to a metro stop, where fast, convenient travel is paramount.

Hyperloop travelers will enter a station directly from the sidewalk and ascend an escalator to a second floor departure café.  The café is skylit and open to a central courtyard garden. At the far end of the café is a bar, where loading sleds dock along its far side. Loading sleds allow passengers to find their Hyperloop seat casually in the friendly context of a café, instead of being rushed to keep up with the five minute departure intervals. This experience will be far superior to the clumsy loading of an airline.

While the loading sled is docked at the bar, Hyperloop staff can serve refreshments, answer questions, and make final security checks. Once travelers are seated and departure time arrives, the loading sled slides into a pod on the adjacent guideway. Once the pod door closes, the pod advances to the departure airlock. After the twenty to thirty minute journey in the tube, the traveler encounters a comparable café environment in the arrival city.

Check back for future posts that will describe other aspects of the design.