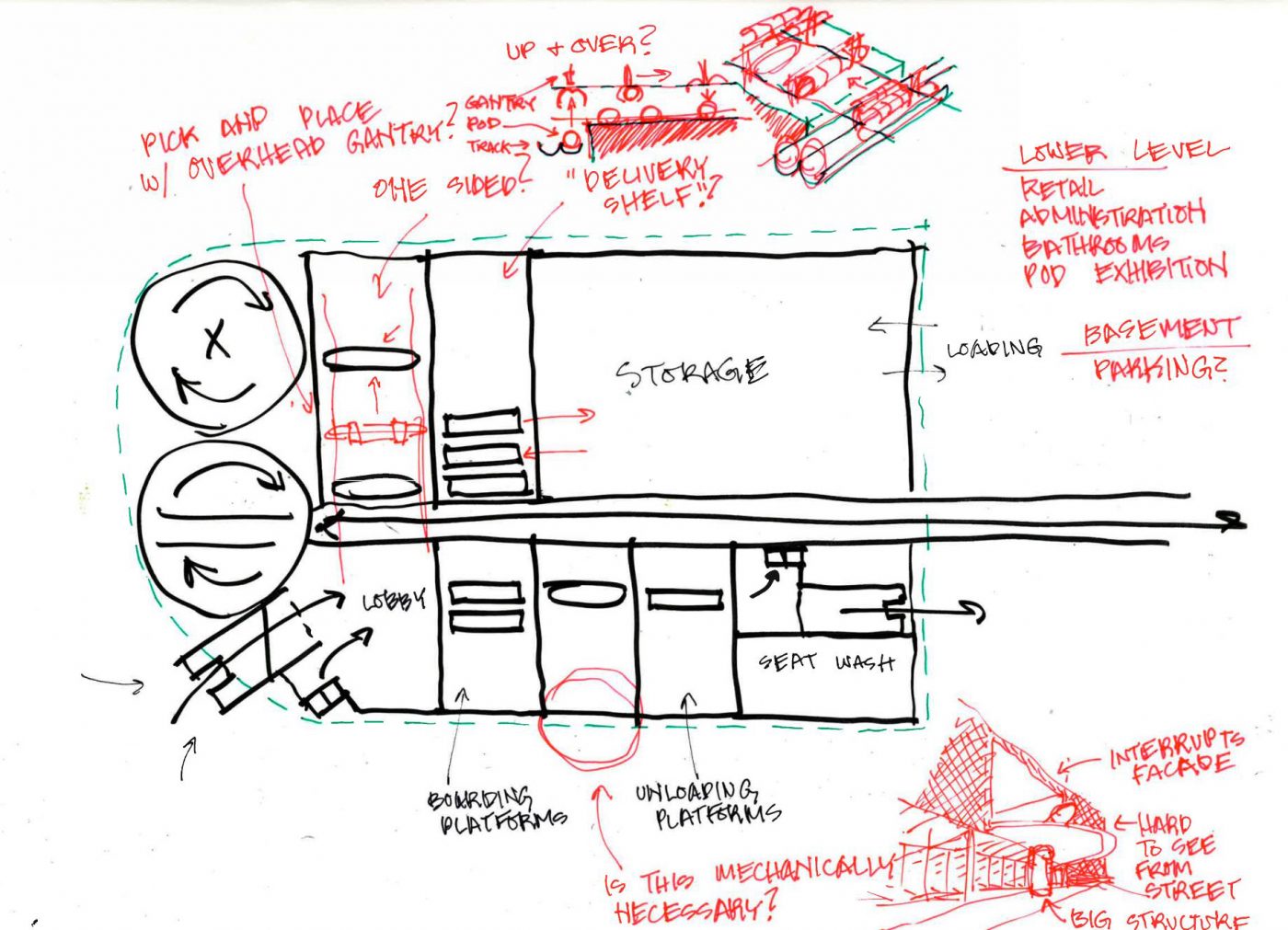 This past September, we participated in a multidisciplinary design sprint named Build Earth Live to plan a series of hyperloop stations for the United Arab Emirates. Drawing from our earlier work on the Hyperloop station typology, we collaborated with HyperPoland, one of the teams we met at SpaceX’s Hyperloop Design Weekend last year. Working with team members across the globe and around the clock during the 48-hour sprint, we earned the BIM for Innovation award in the Build Earth Live event.  At the outset of the competition, event organizers gave teams the locations of three hyperloop stations across the UAE to be connected with tubes. By partnering with HyperPoland, who focused on the engineering crucial to the efficiency of the station, we could focus on the quality of user experience and relation to urban context. Our shared value for compactness initially drew us to the HyperPoland proposal at the SpaceX design weekend, which allows for hyperloop stations in dense urban centers. HyperPoland used multiple floors with gantry cranes and a turntable to compact their station, where we shrunk our station’s footprint with a three-point turn. Locating hyperloop stations in downtowns eliminates the second leg of travel from the station to the city center. To further compact our stations, we both subdivided its footprint into a passenger side and a freight side, facilitating movement while enhancing safety. Both designs also leveraged seating sleds that loaded separately into pod vehicles to allow for more frequent departures. In the Build Earth Live competition, we took advantage of these strategies. Through sketches, discussion, and real time markups using the competition host program Asite, we combined our ideas to the strength of both. Rearranging the turntable and repair area relative to the passenger lobbies reduced the core of the building length by over 100 feet.  Further modifications may be able to reduce it closer to the ideal footprint of 300‘ x 300‘, which approximates half a city block.  Our principle aim in the competition was to show how technology could allow ultra-fast transportation within different dense urban contexts. To facilitate this, we suggested a core and enclosure approach, where the same optimal core is used at all stations and a flexible enclosure modifies its shape and material to cater to a new context. Additionally, we explored the design of a midway station, which  HyperPoland’s adaptable gantry system made possible. One challenge of the competition was that the station sites, which included Fujariah Airport and Dubai International Airport, were located further from sites in dense areas that obviate a second leg of travel.  By necessity, the airports stood in outlying areas, negating the advantage of connecting two urban cores at the hip. However, since the Dubai international airport is relatively close to its urban center thanks to the recent construction boom, metro lines converge close to the airport.  Consequently, this station was able to demonstrate the value of the compact footprint. Realistically, the small size of Fujairah’s metro area and the limited distance between cities don’t take full advantage of the potential the Hyperloop has to shrink distances between metropolises. Cities of large size and approximately 400 miles apart optimize infrastructure cost, passenger capacity, and time savings.  The competition also required separate freight and passenger tubes, nearly doubling the necessary infrastructure.  Given the hyperloop’s potential, it is feasible to have passenger pods and freight pods share the same tube, particularly at different times of the night or day. Building on our work developed for the Build Earth Live competition, we look forward to designing a next generation station with HyperPoland. With each iteration, we are getting closer to realizing a future option for transportation.